Songs We Were Singing: Guided Tours Through the Beatles’ Lesser-Known Tracks

HomeBooksSongs We Were Singing: Guided Tours Through... 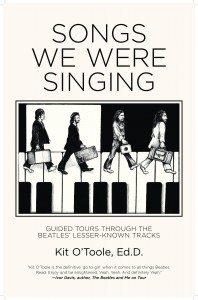 Take A “Magical Mystery Tour” through the Beatles’ Deep Tracks. The Beatles’ music has become so ingrained in our culture that their songs have become an integral part of our everyday lives. Who doesn’t know the words to “Hey Jude” or “Let It Be”? Who hasn’t been moved by the poetry of “Eleanor Rigby” or energized by that opening chord of “A Hard Day’s Night”? Songs We Were Singing uncovers the buried treasures that deserve a second listen. Beatlefan contributing editor and Something Else Reviews “Deep Beatles” columnist Kit O’Toole serves as a musical tour guide, taking readers through the composing and recording processes of songs such as “I’ll Get You” or “When I Get Home.” How do these songs fit in with the Beatles’ legacy, and why do they still resonate with listeners? This magical tour covers their failed 1962 Decca audition, their raw Hamburg performances at the Star Club, BBC radio appearances, and every album from Please Please Me to Abbey Road.

This journey also takes some interesting detours. Not overlooking the solo years, O’Toole also examines certain albums and tracks, reassessing their value. How have albums such as Paul McCartney’s Press to Play and George Harrison’s 33 1/3 aged over the years? This tour itinerary includes a look back at the 2009 CD remasters, a list of John Lennon’s most underrated songs, and a revealing discussion of Ringo Starr’s best drumming performances. The product of many years of studying “Beatleology,” O’Toole’s Songs We Were Singing appeals to first generation fans as well as younger Beatles listeners. Grab a pair of headphones, read this book, and rediscover songs that you never knew—or thought you knew.

Available in paperback and Kindle at: